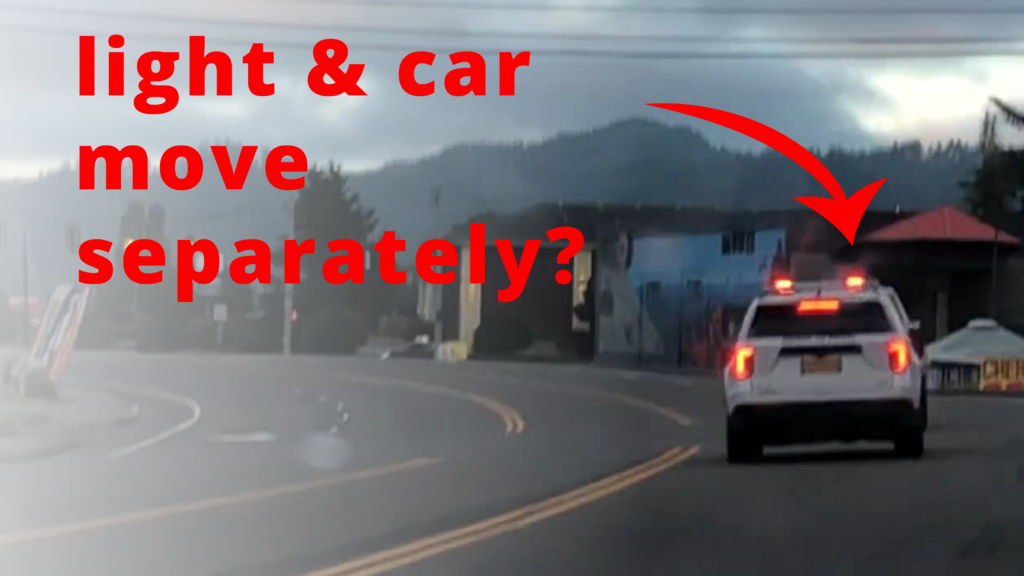 Flickering light sources in traffic turn the light source on and off at a frequency which is high enough so that most people, in most situations, do not perceive the flicker directly. These lights are primarily LED daytime running lights and tail lights, where dimming is achieved through pulse-width modulation.

Our vision is affected by this unnatural blinking whether we notice it or not. Certain situations can reveal these effects even for those who are otherwise not sensitive to flicker. In this post, I will briefly discuss two of these situations: the phantom array and the phantom wiggle.

When can we most easily see flicker? This depends on the size of the light source, the frequency of the flicker, and the angular velocity of displacement (how fast the image moves on the retina). When the source is small and the velocity of movement is high relative to the frequency of flicker, a series of light images appear (beads, or ghosting, or phantom array).

We sometimes see this artifact when a fast object, like a car, moves across the visual scene. Most commonly, however, it happens when we make fast (saccadic) eye movements – and in traffic we make particularly fast saccades, very frequently.

Saccades are quick eye movements to connect fixations. Foveal vision is much more detailed than peripheral vision, so the eyes need to fixate the most informative parts of a visual scene one after the other. The longer the saccade, the faster it gets – but all saccades are so fast that comprehensive vision during the movement is impossible. Yet, our perception of the world is continuous…

During the saccade a flickering light source deprives the system of the reliable visual cues of image blur and continuous change in retinal image. Instead, the flashes of light suddenly appear as salient objects* in unpredicted locations, leading to a confusion of space as well as time.

(*: relative to the direct (normal, intended, continuous) percept of a subliminally flickering source at e.g. 50% duty cycle, the light image in a phantom array is twice as bright! And at 25% duty cycle it is four times as bright, etc.)

The visual image just before the onset of a saccade is particularly informative for the predictions to complete the percept during the eye movement. The blurred image during the saccade is normally suppressed from perception (while it still plays a role in where the saccade will land). Therefore, different parts of the phantom array created by a flickering light are mislocalized differently, saccades become imprecise and perceptual efficiency decreases.

In the past ten years, many have also reported another kind of percept as a result of flicker in traffic. I have made a video demonstration of it (selected to be a finalist in the Best Illusion of the Year 2021 contest) and gave it the name “phantom wiggle”:

A requirement for this phenomenon seems to be a relatively low frequency and/or duty cycle of flicker, as it is most commonly experienced with earlier models of LED daytime running lights and tail lights (e.g. Mercedes M-Class W166 / E-Class W212 / C-Class W204, Volkswagen Passat B6/B7 / Golf 5, etc.), aftermarket products, or bicycle lights. The phantom wiggle is frequently seen when the image is shaky (e.g. due to potholes) and especially when viewed through a rear-view mirror. It may also happen though, when the light and the viewer are stationary: I see some flickering lights as if they were floating, kind of a subdued version of the phantom wiggle. This, I assume, is due to small eye movements (more on this further below).

Why does the phantom wiggle happen?

We can only speculate; as opposed to the phantom array, this illusion has not been experimentally studied yet. The explanation may be similar and along the lines of the above described interference between eye movements and flicker.

Interestingly though, there are some clear differences between this phenomenon and the phantom array:

The fact that the phantom wiggle appears during fixation means that large saccades are not part of the mechanism behind it. However, similarly to large saccades, space perception is altered before microsaccades too: foveal stimuli are perceived as more eccentric and vice versa. This might play a role in the generation of the phantom wiggle, but that remains an open question until tested.

Also noteworthy is the observation that the phantom wiggle is more prominent when external random shakiness is added to the stimulus as opposed to all retinal image displacement being produced by eye movements. This may have to do with either that the dynamics of the movement are different in these two cases (e.g. the amplitude being larger in the former) or maybe that the corollary discharge is used by the visual system to avoid mislocalization. The lessons learned from the phantom array (see above) suggest otherwise, but I just wanted to mention this as a possibility to explore further. (So basically the question is: how much are saccades and microsaccades similar regarding temporal light artifacts?)

Many people are bothered by perceptual effects of flicker while some never notice them. It is therefore another interesting question whether some people are more susceptible to the phantom wiggle and how this may contribute to discomfort and fatigue in traffic.

The phantom array and phantom wiggle are great demonstrations of confusion of the visual system by flicker, as they can be easily experienced by most people. While the real-world safety impact is less straightforward to study and remains mostly unknown, the effect of such mislocalization on the road is clearly not positive.

Before LEDs, light sources used in automotive applications did not flicker. As LEDs are still on the rise (apparently until they replace all other types of lamps on the road), we can expect to see more flicker as well. This is technically not necessary, but pulse-width modulation is still the most common method of dimming due to practical reasons.

On the plus side though, here are three newer trends:

There is a long history of studying the negative perceptual and physiological effects of flicker – for a thorough perspective, see e.g. the work of Professor Arnold Wilkins.

The conclusion is always the same: flicker is bad for us. Depending on the application, it leads to decreased reading speed, increased fatigue, headaches, mislocalization or other perceptual anomalies/illusions, or subliminal effects resulting in lower perceptual efficiency.

Regardless of the details and explanations, the effects of flicker are never positive. Yet, flicker has been ubiquitous all throughout the decades of fluorescent lamps and now increasingly again, with LEDs. The reasons for this are purely technical and can be eliminated with LEDs – so we just need to use them in a smarter way.